We see the whole world as our playground.

"Everyone can make their first trade. It is all about making the second trade profitable." 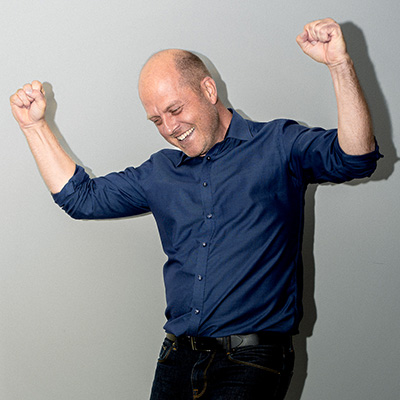 Each power market has a unique setup and distinctive regime. 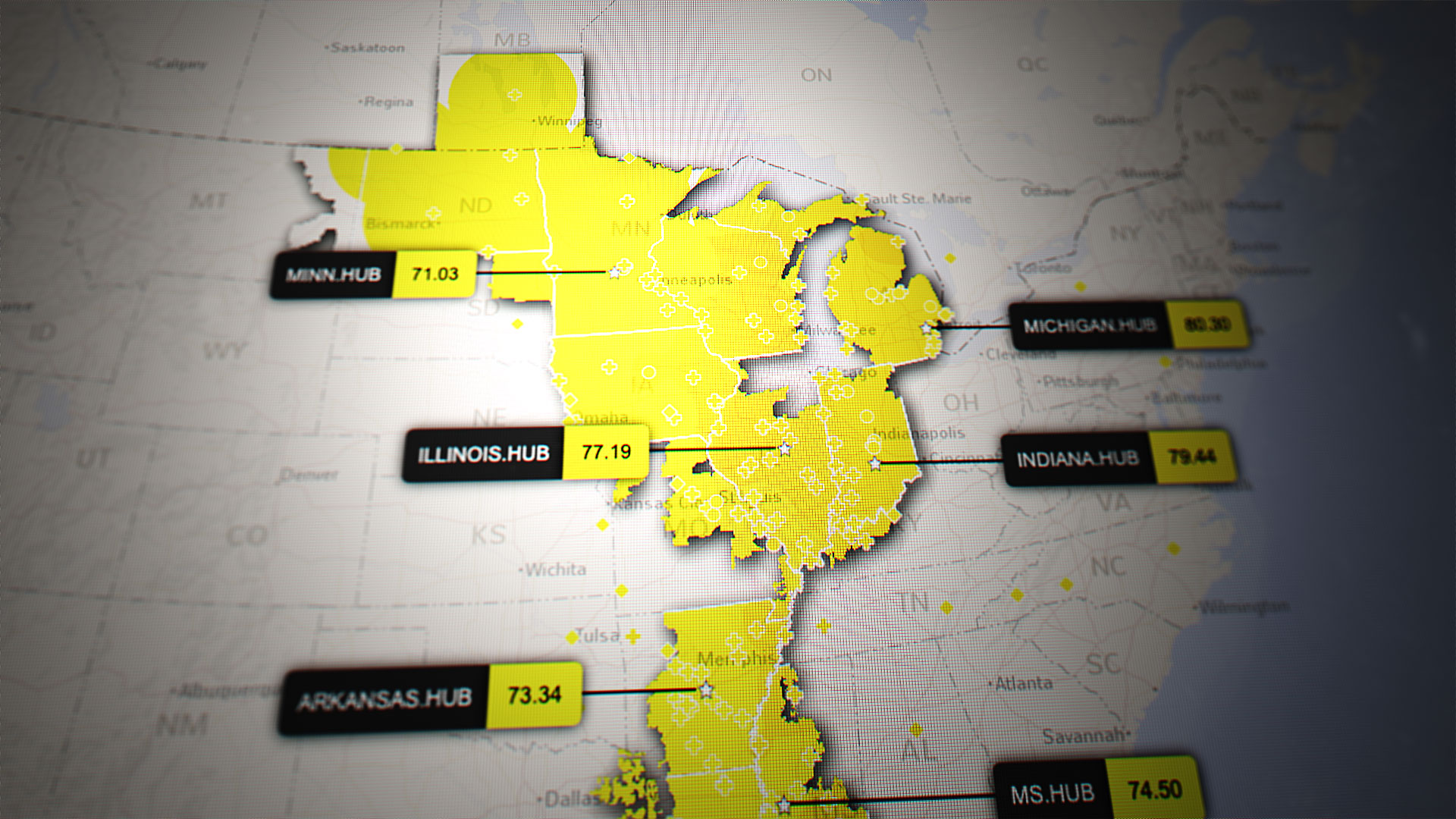 One of our pillars in traded MWh and earnings

The U.S. power market consists of several markets and are thus the largest electricity market in the world. Large parts of the US market are organized in so-called ISOs (Independent System Operators). They regulate both the day-ahead markets as well as the real-time market.

The U.S. power market is where Yggdrasil traded its first MWh, and today it is an important part of our daily activities. We are trading in all the U.S. ISOs i.e., CAISO in California, MISO and SPP in the Mid-West, ERCOT in Texas and PJM ISO-NE, NYISO on the East Coast.

Participants like Yggdrasil who are neither producing nor consuming power are trading so-called “virtuals”. It is in fact a two-sided financial exchange. We bid into the day-ahead market and make the opposite trade in the real-time market.  In other words, we bet if the real-time price will be higher or lower than the day-ahead price. This U.S. way of power trading supports the market in two ways: Firstly, it adds required liquidity to the market and secondly, the virtual trades help reduce the price gap between real-time and day-ahead prices.

The U.S. electricity markets use a so-called Nodal system to figure out the price and flow of electricity. A node is a predetermined point within the transmission system and is usually set at a point where electricity is generated or consumed.

By dividing the power markets into nodes, you get a lot of different electricity prices within each market. For example, PJM, one of the US ISOs serves 65 million people, roughly corresponding to the population in France. The French power market has one single price area whereas there are over 11,000 nodes in PJM. 11,000 nodes mean 11,000 different price points.

The U.S. market consists of three grid interconnections each of them working separately and thus being unable to smooth out imbalances between each other. 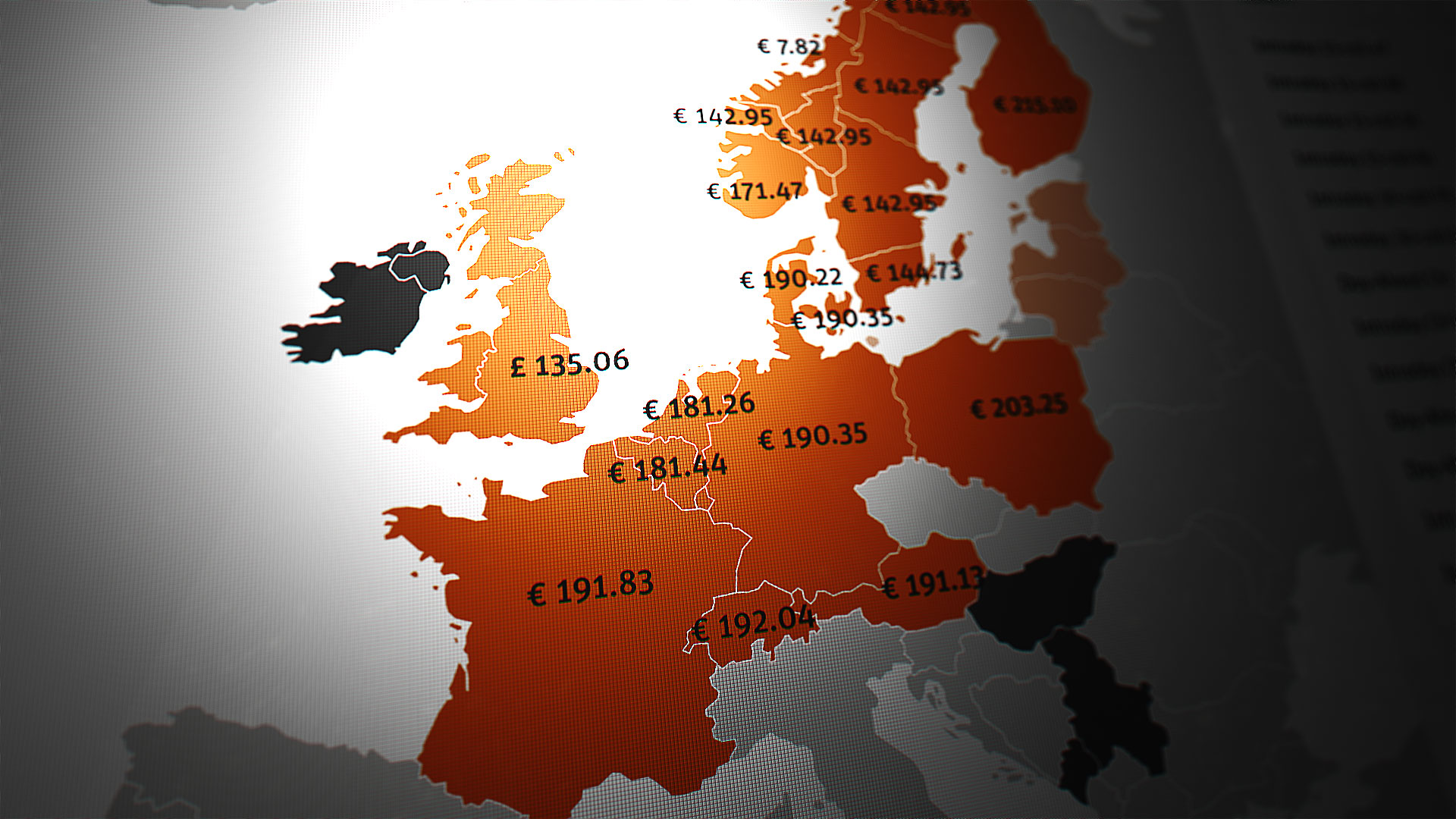 A web of power markets with many interactions

Yggdrasil entered the European power market during its second year, and we did our first trade in the Netherlands. Today, the European continent is a vital part of our portfolio.

In general, the European power market has two basic parts, the exchanges and the TSOs.

Electricity is mostly traded at power market exchanges before delivery. This is where two market participants exchange money for MWh. Some of the largest power exchanges in Europe are: EPEX Spot and Nordpool (the two largest exchanges), OMIE, SEMOpx, Borzen and OKTE.

Within each of the six regions, the market “should strive to harmonize.” It means that within each region the countries’ grids should work together. The purpose is to make it easier for both market participants to trade electricity and for the grids themselves to better manage the balance within each grid interconnection and minimize power outages.

License to trade
European short-term power market trading is done as physical trading. Most electricity is purchased or sold from the power exchanges either in the day-ahead or the intraday market.

The power trader is responsible for balancing the electricity. Therefore, a trader is also called a “Balance Responsible Party” (BRP). In all European countries, being a BRP is like a license to trade and without it you have no access to the power markets.

The choices of what to do with a trade i.e., moving it into a different physical region, trading it back at the same place later, or finding a different counterparty are the largest part of trading at Yggdrasil. Engaging in the second trade, you will see if you have made a profit or a loss. 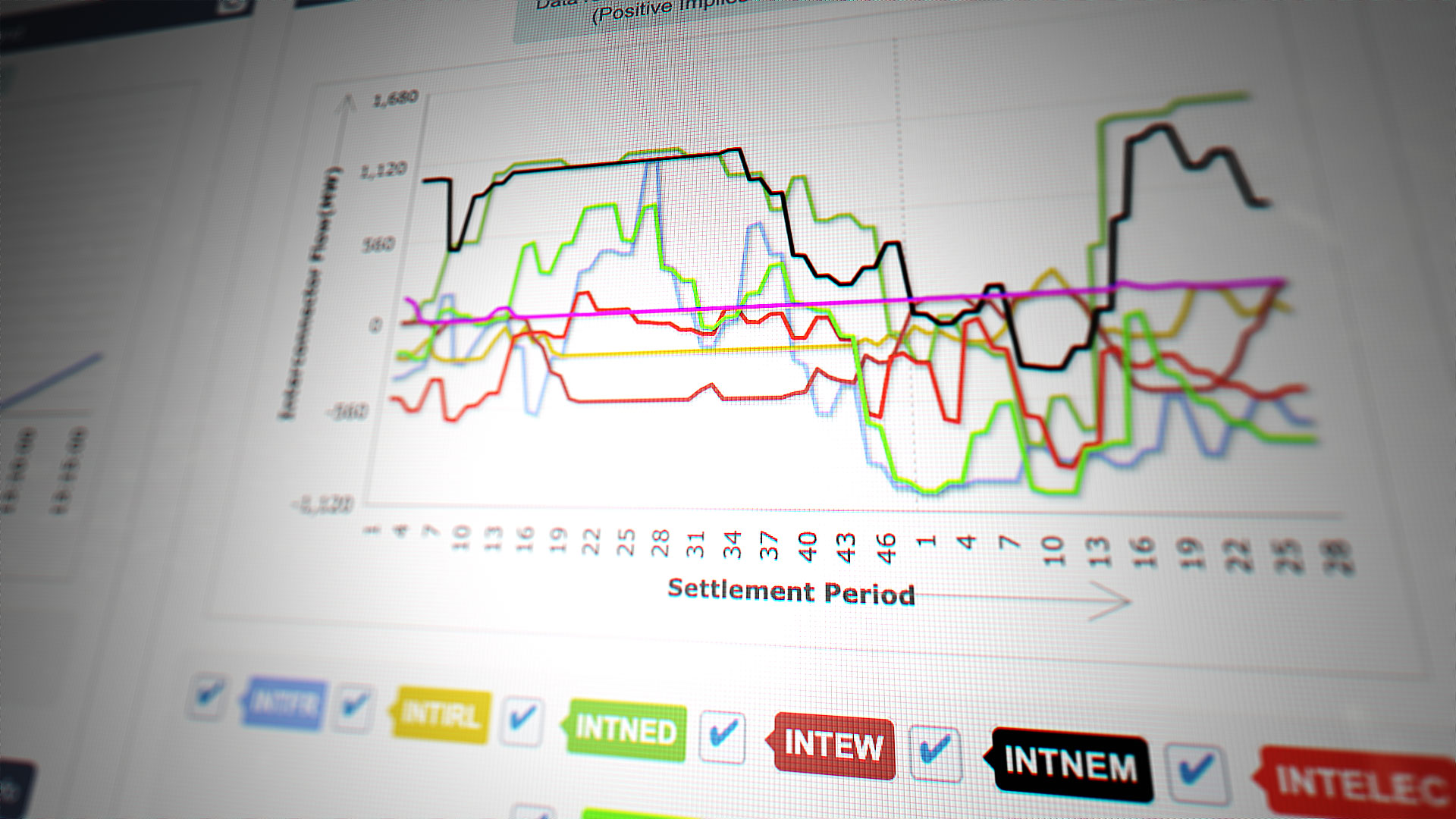 Much like its geography, the electricity markets in Great Britain and Ireland were historically almost an island. Electricity had to be generated in the countries themselves as connections to continental Europe were sparse.

This has changed in recent years with the addition of multiple new interconnectors. Today, Great Britain and Ireland can import more than 10% of the required electricity from their neighboring countries in continental Europe.

During the last decade, major changes have taken place. Historically, Great Britain was relying on coal, nuclear, and gas, and today, coal is almost phased out. It has been replaced by predominantly wind, which is providing a large portion of the total consumption adding a sprinkle of solar generation on sunny days.

The downside to renewable energy is that we cannot always rely on the wind, and the sun is too often covered by clouds. With the current tensions in the world, gas prices can be extremely high affecting the electricity prices accordingly.

Price spikes have become much more common. In 2019, system prices have never been above £2,000/MWh. In 2020, this happened only once. In 2021, we started to see volatility rise to new levels. The average power prices increased approximately 4 times at the end of 2021 compared to the previous few years, and on 20 occasions prices were higher than £2,000/MWh. The price spikes continue, and in January 2022 alone we saw 8 prices above £2,000/MWh. Since then… well high volatility has become the norm.

Yggdrasil is power trading in Great Britain, Northern Ireland & the Republic of Ireland.

Unique for the Japanese power market is that the country is divided in the middle by two different frequencies. In East Japan the frequency is 50 Hz and in West Japan 60 Hz. The reason is found in the purchases of two types of generators back in the 1890s.

The Japanese power market is divided into 10 TSO areas where 9 of the areas, from Hokkaido in the North-East to Kyushu in the South-West are interconnected. Okinawa is the 10th TSO area located around 600 kilometers south of Japan’s main islands. It operates on its own and is monopolized.

Cleared market trading started in 2005 with the creation of JEPX, the first and only day-ahead power exchange in Japan. Via JEPX, electricity is traded in the 9 TSO areas. Between 2005 and 2011, customers with an average demand of 50kW or more were allowed to switch electricity supplier. However, they rarely bothered to switch supplier, even if the new suppliers were offering lower prices and better service. Most of the consumers stayed with the incumbent “Big 9” and only about 1% of Japan’s electricity was traded via JEPX.

Liberalization of the Japanese electricity market

The liberalization of the power market in Japan happened as a consequence of the horrendous Tohoku earthquake in 2011. Focusing on the energy market, the catastrophe led to a review of Japan’s energy politics. Many of the nuclear power stations were (temporarily) shut down and the share of nuclear has been radically reduced since the catastrophe.

This meant that Japan’s electricity had to be produced from alternatives such as coal and gas after the Tohoku Earthquake. In the years following the Fukushima Daiichi nuclear disaster and the subsequent large-scale shutdown of the nuclear power industry, Japan’s ten regional electricity operators have suffered very large financial losses, amounting to more than US$15 billion in both 2012 and 2013. That called for drastic changes in the power market.

Since April 2016, domestic and small business mains voltage customers have been able to select from over 250 electricity suppliers, though primarily locally and mainly in the larger cities. Also, wholesale electricity trading on JEPX was encouraged which until then only traded 1.5% of the power generation.

These measures triggered the changes needed and by June 2016, more than 1 million consumers had changed their electricity supplier. Since 2020, transmission and distribution infrastructure access have been more open, aiming to help competitive suppliers cut costs.

Japan is the only advanced nation in the world that uses two frequencies. The country has effectively divided its national power grid in two parts: one for the northeastern half of the country, which includes Tokyo and another for Nagoya, Osaka, and the rest of the Southwest. Standard frequencies are either 50 Hz or 60 Hz, and there is no technical reason for using one frequency over another. European countries are using 50 Hz frequency, and countries like the United States, Canada and South Korea are using 60 Hz frequency.

Over the years, the grids grew with 60 Hz electricity emanating from Osaka and 50 Hz electricity spreading out from Tokyo. Eventually the entire country was wired. The frequency frontier is marked by the Fujigawa River in Shizuoka Prefecture and the southern prefectural border of Niigata. All electricity east of the rivers is 50 Hz, whereas the west is 60 Hz.

Today, there are some “frequency conversion stations” built across the river. However, this is only working for a fraction of the usual transmission that we would see in Europe or the US. 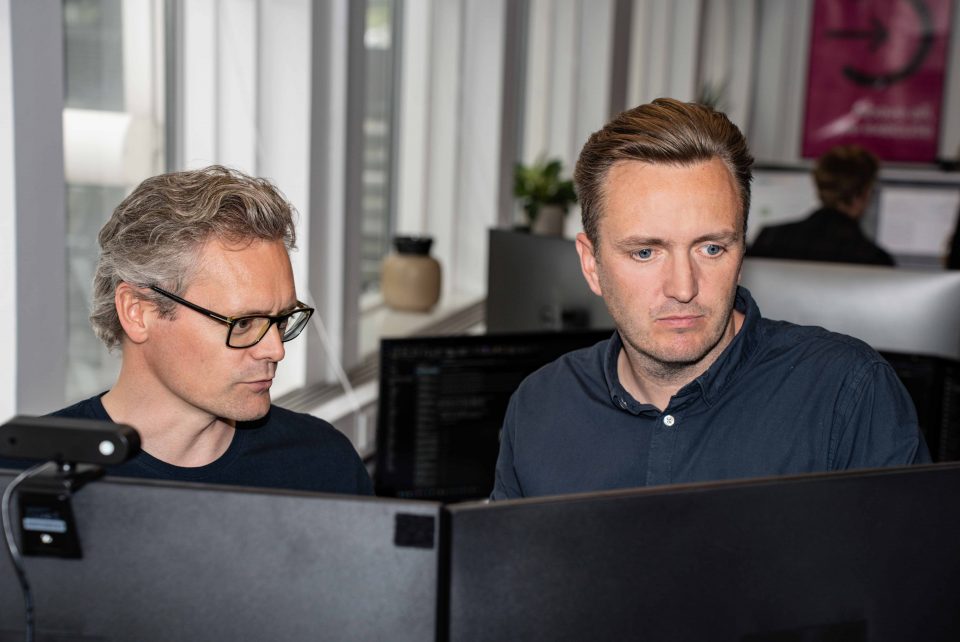 Please get in touch if you would like to hear more about our data-driven approach to power trading, or you think trading strategies based on historic data are the best way to predict future power prices.

We are always on the lookout for talents with great coding skills and an analytical mindset that enjoy juggling with difficult maths.

We look forward to hearing from you.

Get a career at Yggdrasil

Join us and trade power globally.